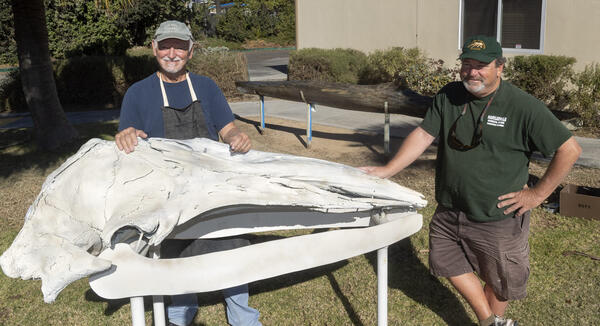 Jim Serpa remembers approaching the carcass, his dog going crazy sniffing the air as they approached the 60-foot whale washed up at San Onofre State Beach.

The fin whale sat at the surfline on the tucked-away beach, a group of surfers riding waves out in the water just beyond the rotting creature.

“You could see the whale juice seeping into (the water), they probably reeked,” Serpa said of that day nearly 20 years ago.

Serpa knows a little something about dead whale stench. Lifeguards up and down Southern California’s coast know that when something washes up dead, Serpa wants to be on speed-dial to see what he can “scavenge,” he said jokingly.

The 15-foot jaw bone of the whale washed up that day has spent years on display at the entrance at Doheny State Beach along with the a skull from a dead gray whale found years later.

Now several years retired from his post as head ranger at Doheny State Beach, Serpa with help from Joe Cocke, the assistant curator at the Point Vicente Interpretative Center and curator of the Palos Verdes Historical Society, is working to preserve the bones before they are lost to the elements.

Many beachgoers simply stroll pass the bones, not knowing what they are or the story of how the mega relics got to be at the Dana Point beach.

Serpa has a whale of a story to tell.

Plenty of them, actually.

He still remembers the call about the 60-foot fin whale that washed up at San Onofre’s Trail 1 in August 2001, just as he was getting ready to head to the Pageant of the Masters in Laguna Beach.

He apologetically looked at his wife, Debbie, who knew the drill and sent him on his way.

Serpa showed up just as a guy from the Department of Fish and Wildlife was sawing away at the jaw – not an easy task, but worth the effort for research sake.

“He spent all day cleaning and he got this jaw, this beautiful jaw. He must have sharpened his knives a thousand times that day. And it reeked,” Serpa said. “He couldn’t saw through it. Three or four of us twisted the jaw bone until it came out of the socket.”

The guy called his boss to declare with pride that he was able to get the jaw bone out.

“The boss goes ‘We don’t need a jaw from a fin whale, we have like three or four already,’” Serpa recalled. “He looked at me and said ‘Do you want it?’”

That was a rare treasure from the world’s second largest whale that Serpa couldn’t refuse. He had the bone – so heavy several men couldn’t lift it – hauled to Doheny, where it hung for three years until the oils dried out. In 2004, it was put on display.

The big whale skull next to it is from a gray whale that washed up dead in 2006, also at San Onofre, further south at Trail 6.

That bone sat in the maintenance yard for three years. Just as Serpa and workers geared up to mount it outside of the Doheny Interpretive Center, they noticed the jaw was missing, parts that were there just days earlier.

“We threw them away,” a maintenance worker told Serpa. “We thought they were trash.”

“That’s why the jaw bone isn’t there,” Serpa said of the bones on display now, adding they had a welder create what looks like a jaw out of metal, which also helps to support the bone.

Serpa noticed earlier this year the bones started to look battered, they were deteriorating and splintering from being in the sun and salty air.

So Serpa and Cocke are restoring the bones using a coat of hot surfboard resin to harden the surface before giving it a fresh coat of bone-colored paint.

“We’re just trying to save them,” Serpa said. “I didn’t realize the jaw has been there for nearly 20 years. It has taken some beating. It was starting to look bad.”

During the recent restoration project, curious passerby stopped to ask about the whale bones.

“We had a dozen people come up and say ‘What are these? What’s the deal? What’s the story’?” Serpa said, happy to retell his whale tales.

Serpa said he remembers as a kid soaking up all the knowledge he could about sea creatures, and he hopes relics like the ones he and Cocke are preserving can do the same for the next generation.

During his time as head ranger for Doheny State Beach – he retired in 2013 – his goal was to make the Interpretive Center a “little jewel” filled with educational material, where kids can learn about the ocean and marine life. At the moment, due to the pandemic, it is closed to the public.

Debbie, his wife, knows it’s a passion that can mean some surprises. Like the time Serpa tucked away in the freezer parts of Lily, a gray whale that died in 2010 off Dana Point after an entanglement – saving the whale’s lice and blubber as a favor to researchers.

“Luckily, my wife put up with all this stuff,” he said.

And he made it to join her for the Pageant of the Masters that evening, despite the lingering stench from trying to salvage the fin whale’s jaw bone.

“My nose hair was saturated by the whale smell,” he said. “I could smell dead whale the whole time.”