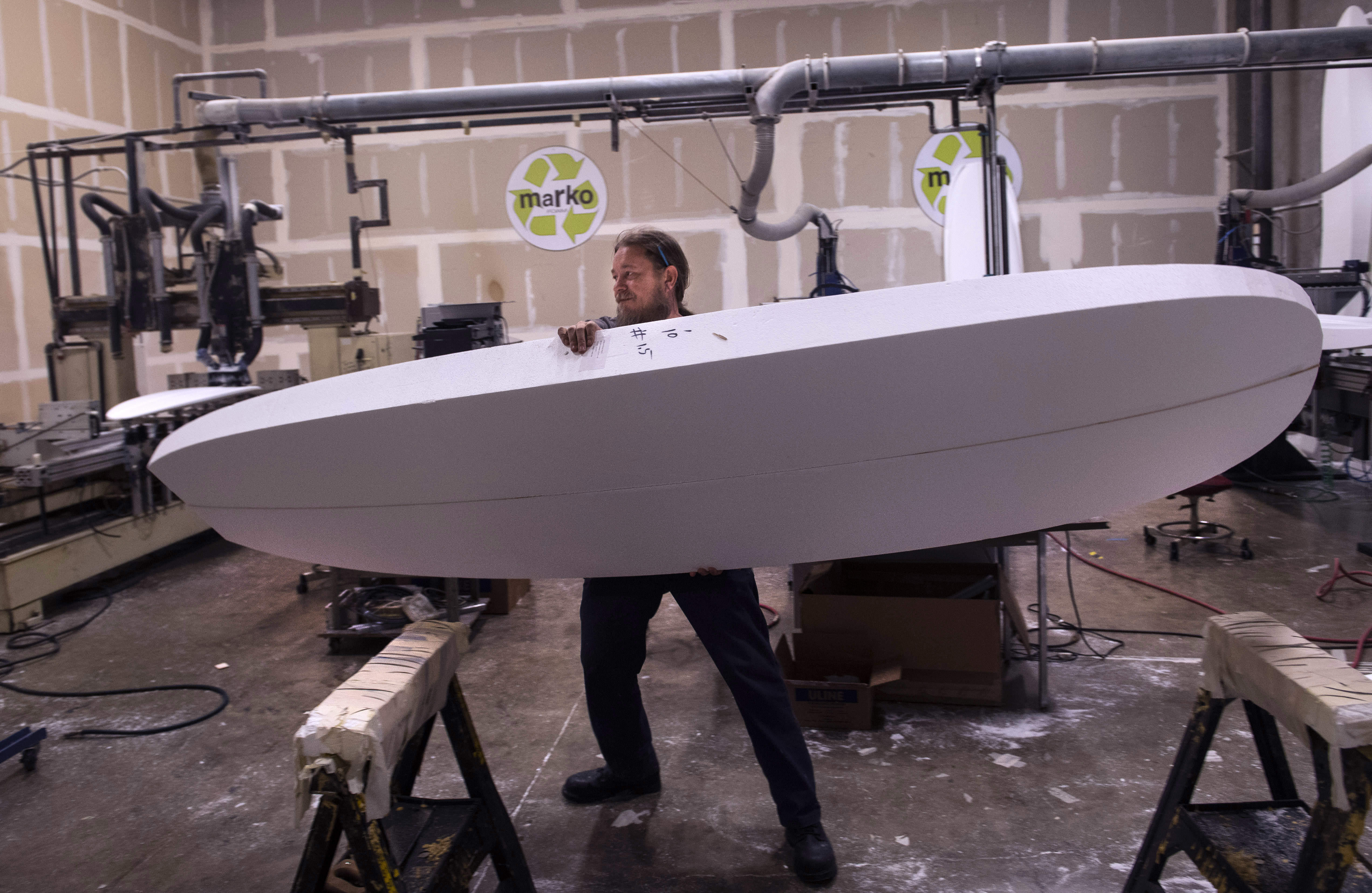 The surfer walks through the sand, paddles into an ocean twinkling beneath the open sky and waits among the dolphins and sea birds for a wave shaped by the confluence of distant storms, local breezes, shifting tides and ocean bottoms.

But there’s a dirty secret to the idyllic nature experience.

Toxicity, greenhouse gases and non-biodegradable materials accompany the average surfer in every phase of the sport, from the gas-fueled trip to the beach to the plastic surfboard with its plastic leash to the rubber wetsuit to the coral-damaging sunblock.

Greener alternatives are emerging on all fronts, with the surfboards themselves posing the most complex dilemma. The growth of so-called “ecoboards” has been dramatic, spiking from 1,400 sold 2012 to more than 60,000 in 2018, according to Sustainable Surf, the surf industry’s designated monitor of environment-friendly boards. Helping lead the way is surfing icon Kelly Slater, who has a controlling interest in the Firewire Surfboards, the largest maker of such boards.

But ecoboards account for only 10% to 15% of the global market, according Brett Giddings of Sustainable Surf. And even most ecoboards have sustainability issues, as players in the green surfboard movement don’t hesitate to point out.

“There’s still a lot of room to go,” Giddings said. “No big manufacturer is 100% recyclable. But we’re definitely on the path there.”

While surfboards are a fraction of the global plastics industry, there are an estimated 400,000 to 600,000 boards made and sold annually — which would work out to an industry worth somewhere in the neighborhood of $300 million to $500 million.

Sean Smith, executive director of the Surf Industry Manufacturers Association, said he knew of no firm numbers of the surfboard industry’s value, but he did note that the sport is growing. He put the number of surfers in the U.S. at 2.8 million, up from 2.5 million in 2015.

Surfing experienced a sea change in the late 1950s, when board maker Hobie Alter and employee Gordon “Grubby” Clark developed polyurethane foam surfboard cores, known in the sport as blanks. They were lighter, easier to shape and more responsive in the water than the balsa wood cores they replaced.

That technology — along with the popularity of the “Gidget” book and film — is credited with helping to push the sport’s popularity into the mainstream.

In 1961, Clark took over the foam operation in Laguna Canyon and built a near monopoly through a combination of responsiveness to board shapers’ needs and  cutthroat business tactics. Having established his product as the best and most desirable, Clark was infamous for cutting off any customers who didn’t use his blanks exclusively.

Then on Dec. 5, 2005, suddenly and without warning, Clark faxed customers that he had shut down his business. He made reference to environmental issues and would eventually face at least one civil suit alleging that chemicals used in his plant were responsible for an employee’s death. The polyurethane fumes in his factory contained toulene di isocynate or TDI, listed in California as a carcinogen.

“I may be looking at very large fines, civil lawsuits, and even time in prison,” Clark wrote customers.

Clark’s move left a huge void in the industry.

“It’s the best thing that could have happened,” said environmentalist and board maker Ryan Harris, whose modest Earth Technologies shop in Torrance is often mentioned as the greenest surfboard operation in the state.

For years, a few manufacturers had been working with expanded polystyrene (EPS) blanks covered with fiberglass and epoxy resin, a less toxic alternative to the longtime standard of polyurethane foam, fiberglass and polyester resin. When Clark’s stranglehold on the industry abruptly ended, it opened the door for widespread manufacture of EPS/epoxy boards — including by board makers who’d previously used Clark Foam exclusively.

Marko Foam, with operations in Utah and Irvine, had been a veteran manufacturer of a variety of foam products, with its EPS surfboard blanks being a minor niche. But that sideline role changed when Clark shut down and shapers explored alternatives.

“The growth was ridiculous,” said Ty Peterson, a Marko Foam co-owner. “People started seeing there was other technology.”

While the new materials are less toxic to work with — and often result in a longer-lasting board  — they still create carbon dioxide and result in a non-biodegradable final product that often ends up in the landfill.

But the materials also offer a greener opportunity. Epoxy bio resins can contain more than 50% plant-based components. If the resins used on a board include at least 19% biological components, the board can carry Sustainable Surf’s label designating it as an ecoboard.

To qualify for the higher, “gold level” ecoboard, the epoxy outer shell must use bio resins and the core of the board must have at least 25% recycled or plant-based product. The gold-level designation remains rare. Marko Foam has a recycling program and offers blanks that are 25% recycled foam, but Peterson said imperfections make those blanks a bit harder for shapers to sand.

While Harris uses recycled Marko Foam exclusively, Peterson said most of his surfboard customers opt for his company’s virgin blanks — that is, those with no recycled content.

“Most surfboard shapers haven’t accepted the recycled foam,” Peterson said, noting that recycled foam can require shapers to modify their technique. “You have to be willing to adjust.”

Also, ecoboards still generate a carbon footprint — it’s about 30 percent smaller than the traditional polyurethane board, creating 74 pounds of CO2 compared with 105 pounds for a polyurethane board, according to Sustainable Surf. And that doesn’t account for the leftover foam, fiberglass and other significant waste involved in making a surfboard.

Harris’ says he’s committed to zero waste in his Torrance shop. His efforts include everything from grinding up leftover waste to make into beverage coasters and hand planes for body surfing to feeding foam scraps to Living Earth Systems’ meal worms, who can turn them into organic waste. Firewire has also set a zero-waste goal, but leftovers continue to be a significant industry issue.

Others are experimenting with their own renewable materials — including bamboo cores and hemp-based fiberglass — fueling belief in an ever-greener future for the surf industry.

“Every year there are more products being developed specifically with the environment in mind,” Peterson said.

While industry giants like Channel Islands and …lost offer ecoboards, Firewire is the only major brand that can boast that every board it makes carries the designation.

In a 2017 Loyola Marymount lecture about the industry’s environmental efforts, Firewire CEO Mark Price spared few in his critique.

“We’re not even close,” he said. “There’s a tremendous amount of awareness, when you talk to surfers about the environment, if for no other reason than we play in it most days.

“But it’s not really translating into action.”

Firewire is leading the way among the big names, with legends Kelly Slater and Rob Machado riding the brand — or their own spin-off brands — exclusively. But most elite competitors continue riding polyurethane boards, a result of lingering perception that the traditional technology performs better in the water.

“Pro surfing has really held back the adoption of green materials,” Price said.

Early epoxy boards rode and felt dramatically different than their polyurethane counterparts, typically being described as having “corkier” buoyancy and and handling. But adjustments and refinements have won converts. And while an epoxy shortboard typically costs about $100 more than a polyurethane board, it’s more durable and retains its desirably springy response longer.

Huntington Surf and Sport, one of Orange County’s largest surfboard retailers, stocks about 300 boards at any given time, with EPS/epoxy boards having grown to about half the inventory and traditional polyurethane accounting for the rest, according to veteran shop seller and buyer Mark Reeder. Firewire is the best selling epoxy board in the shop. While they all carry stickers verifying them as ecoboard, a random check of other epoxy boards in the shop found few featuring the eco-friendly designation.

Older surfers and average, everyday surfers are more likely to buy epoxy boards while young, aspiring competitive surfers still opt for what most pros ride, Reeder said. In either case, environmental impact is rarely part of the conversation.

“Nobody comes in and asks for an ecoboard,” he said. “High performance or classic, old-school designs — those are the things people are looking for. They do come and ask for epoxy: ‘I rode my buddy’s epoxy and it was awesome.’ But they don’t ask for green surfboards.”

Patagonia has pioneered wetsuits made of plant-based rubber as an alternative to the petro-based neoprene that’s currently the industry standard. Kassia+Surf will send you a pre-paid shipping label for your old wetsuit, recycle it into yoga mats and give you a discount for your next wetsuit from the company.

Slater has branded recycled leashes and traction pads made from algae. Companies like Avasol increasingly are producing ocean-friendly, bio-based sunblock. And Sustainable Surf has expanded its mission to include planting several million mangrove trees in Myanmar. The sea trees are five times as effective in sequestering carbon dioxide as trees on land, according to the organization.

And there are a few 100% green surfboards. The fin-less alaia is made of entirely of wood, based on the Polynesian planks used prior to the 20th century. But you may be as likely to spot a whale in the water as an alaia.

“Some people shred on those boards, but they’re certainly not easy to surf compared to a modern surfboard,” said Sustainable Surf’s Giddings.

Firewire’s Price has acknowledged that the green surfboard has to perform as well as any other to be widely accepted by surfers. He says ecoboards aren’t the ultimate solution because they aren’t fully sustainable, but called them a starting point available to all board makers — and surfers — today.

While there’s a short-term profit sacrifice in terms that green board makers need to accept, Price emphasizes the need for environmentalism to be part of corporate ethos throughout the industry.

“We’ve got to start looking at this planet from a really long-term perspective,” he said at the Loyola Marymount lecture. “Companies need to realize at some point in the future, if you’re not operating your company in the most sustainable way possible, consumers will reject your product — all other things being equal.”