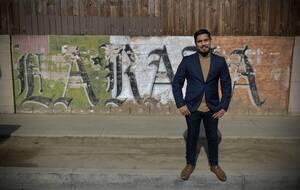 Jonathan Ryan Hernandez celebrated his recent election to the Santa Ana City Council by getting a tattoo.

The image, on his right bicep, depicts the faded “La Raza” mural near El Salvador Park. The mural is part of Santa Ana’s Artesia Pilar neighborhood where, growing up, Hernandez was exposed to crime on the streets and inside his own home.

The tattoo, Hernandez explained, pays homage to “the neighborhood that made me who I am.”

Hernandez, 28, said he’s the first man in his family on his father’s side to not go to jail or prison. And he’s still deeply connected to Artesia Pilar. A father since he was 17, Hernandez is raising his daughter in the same home where he and his mother grew up, in an area where it was routine for Hernandez to witness gang violence and drug use.

But he’s broken the cycle of trauma that has trapped his family for generations.

Last week, Hernandez was sworn into office by his 10-year-old daughter, Evoni. And on Tuesday, Dec. 15, he attended his first regular meeting as councilman.

His goal is to be a voice for people like him in Santa Ana.

“I set myself on a mission to help people who have backgrounds like mine. I want to tell their stories.”

His neighborhood, he said, “was always counted out.” As he put it on Facebook: “We were the kids who were too rough, too tough, too poor, not educated enough. I grew tired of being counted out and one day decided to fight back.”

“I’m not your typical council member. I’m a little different.”

On Raitt Street, where Hernandez grew up, gang life was pervasive.

“All the dads were gang banging,” he said.

“I remember coming home when I was a little boy and seeing my uncle in the backyard. And he was with a youngster who overdosed.”

Police arrived and arrested the uncle. Hernandez, then in second grade at Freemont Elementary, wasn’t sure how to feel.

“My uncle wasn’t a good guy,” Hernandez said. “But he was my uncle. I loved him.”

The next day, the police officer came around to check up on Hernandez and brought Pokemon cards.

“I never forgot that.”

But such kindness was rare. More common, Hernandez said, was bullying at school and violence in the streets. Hernandez said he once was beaten for “walking down the wrong street.” When he fought back, he added, he drew a suspension from Willard Intermediate.

“What does a kid who comes with a background like mine supposed to do? I defended myself.”

He was raised by a single mom and rejected by an absent father, who Hernandez describes as a neighborhood gang leader who claimed Hernandez was not his son.

“I look just like him,” Hernandez said. “I remember being a little boy and knowing about my dad and thinking ‘Dang, how do I not become him?’”

Then, when he was a senior at Santa Ana High School, Hernandez and his girlfriend became parents. It was a game changer; a difficult transition that ended with him falling in love with his baby. For most of her life, Hernandez has been her primary caregiver.

“I had to raise my daughter while also raising myself and providing a roof over both of our heads.”

That meant getting a job after high school graduation instead of going to college.  It also meant teaching himself how to be a father, when he had no role model.

“I had to become a man very quickly.”

Hernandez has worked as an organizer, an insurance company agent, a public relations consultant, an assistant with the Orange County Labor Federation. He’s been a case manager or social worker with organizations that provide services to people who were previously incarcerated.  Since February, he’s been working with foster youth through a mental health agency.

Some of his most pivotal work was with Santa Ana Unidos, a non-profit he created in 2015 to offer community kids arts and recreational sports, including a boxing club.  In 2018, the group hosted a music festival – “The Roses that Grew from Concrete,” which brought together hip hop artists, educators, and others with a focus on keeping youth from the prison system.  The group closed that year after a grant ran out.

The symbolism of “roses that grew from concrete” was — and remains — important to Hernandez. Inspired by a Tupac Shakur poem of the same name, Hernandez said the phrase is “a reminder that good things can come from difficult foundations, and that’s something I’ve always tried to remind people.”

Alan Woo, who served as the Santa Ana Unidos’ deputy director and lives in Artesia Pilar, predicted Hernandez will be a different kind of councilman.

“The people who grew up here have a pain and a trauma. They share that with each other,” said Woo, whose wife Ruby grew up in Artesia Pilar and is a long-time neighborhood advocate.

Both said that Hernandez will represent the Ward 5 district by listening to what residents want, versus telling them what they need.

“He asks: ‘What do you think? What do you want to do?’ That’s a great difference,” Woo said.

“There are some politicians who want to be king. He wants to lift up the voices in our neighborhoods.”

Hernandez said he was fortunate to have a mentor. Mark Muñoz, a now retired professional mixed martial arts fighter from Mission Viejo, offered Hernandez a free spot in his Lake Forest training gym starting when Hernandez was still a senior in high school.

“He took me under his wing. And he put me in the gym with the best fighters in the world and he didn’t charge me a dollar. I was in the room with guys I watched on TV.”

“I was also a fan,” Hernandez added. “He showed me you could have status, have power, be influential – and still sit side by side with a person like me. He made me feel like I was somebody.”

Working out with the stars he admired, Hernandez learned that they were not reaping their fair share from lucrative ticket sales and promotions, nor were they protected when hurt. So he helped organize them. In 2016, a Congressional bill was introduced that extended to mixed martial arts fighters the same rights afforded to boxers under a federal law named after boxer Muhammad Ali. The bill was reintroduced in 2017, when the number of sponsors grew from 7 to 58. It was last referred to a Congressional subcommittee.

“That was a big part of my journey that led me to want to run for office,” Hernandez said.

Another influence, and motivation, was fatherhood.

“I would not have run for City Council if I wasn’t a dad, (and) to know that I am going to leave this place better than I found it.”

His goals on the council are many. Big picture, he wants to address the root causes of inequality. He wants Santa Ana to offer a free WiFi program and an early education program, more funding for parks and recreation, and implement rent control along with additional affordable housing, among other things.

Hernandez believes people are not defined by their adversities, but how they respond to them.

“I’m about redefining our narrative,” he said.

And as a councilman, he wants to share the stories of his neighborhood and others like it in Santa Ana.

Hernandez also wears his stories. They are imprinted on his right arm.

He has three tattoos. The first one celebrates being honored by La Opinion newspaper, which in 2017 named him one of 30 people under the age of 30 making a difference. That depicts a rose growing from concrete. “It’s a reminder that regular people like myself are just as valuable.”

The second tattoo, a lion, celebrates the success of his 2018 Santa Ana Unidos’ concert. Hernandez said it’s a reminder that “it’s important to be resilient…good things do come, but they don’t come easy. You have to work hard for that.”

And the last, he said final tattoo – the one he got after winning his seat on the council – depicts his neighborhood’s La Raza mural.

“Men in my family would get tattoos to glorify their gang life. My tattoos tell stories about redemption, perserverance, culture. They’re my journey.”

The stories, he said, that he wants to share.