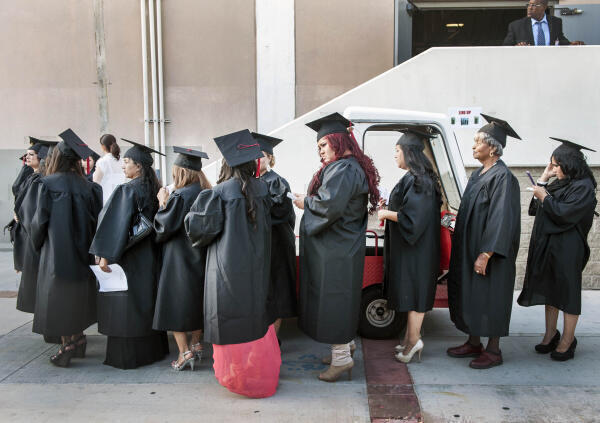 As businesses start to reopen and parents prepare to head back into the office, they may be thinking of placing their kids in a child care program.

They could be in for a shock, though, to learn that such service may be even more difficult to come by than before the coronavirus pandemic.

A number of child care facilities have shut down in the past year, and many that have remained open are operating at reduced capacity to meet health and safety standards in response to COVID-19, further limiting the number of available slots in an industry where space has always been in short supply.

“I assume parents won’t know that it may be more difficult and more expensive to find care until they are ready for care again,” Keisha Nzewi, director of public policy for the California Child Care Resource & Referral Network, wrote in an email. “Even pre-pandemic, child care wasn’t something you could just find on a whim. I suggest that when a family is in need of care, they begin their search as soon as they can.”

Statewide, there were 3,635 fewer active home-based child care licenses (about a 14% decrease) and 4,873 fewer center-based licenses (a 33% decline) in January of this year compared to January 2020, according to the network.

In recent days, teachers in the Los Angeles Unified School District have been speaking out about the challenges of finding child care for their own children as they prepare to return to work on campus over the next several weeks.

In some cases, teacher Tomia Mitchell-Haas said, parents had pulled their children out of child care at the start of the pandemic, only to learn that they’ll now be placed on a wait list to get back into the program because of reduced capacity. Others reported calling child care providers within 40 miles of their homes to inquire about available space, to no avail.

“People aren’t realizing what the situation is,” Mitchell-Haas said. “There’s been a lot of pressure to open up schools. A lot of parents do need to send their kids to school … but also they’re not really thinking too much about the (teachers) who have to work and don’t have a school to send their kids to right now.”

The anxiety some families face over their kid’s child care arrangements are real.

One parent who relies on Scott Family Childcare Learning Center in North Long Beach, continued paying the child care provider for three months to retain a spot even though the person had temporarily stopped bringing their child into the facility, said Catherine Scott, who owns the daycare.

Parents are willing to go to such lengths because they’re aware just how competitive it’s become to secure child care.

In September, rules imposed by the California Department of Public Health to limit interaction among children and adults at daycare sites dictated that youngsters be restricted to cohorts of no more than 14 children and two adults, thus limiting capacity and flexibility for child care providers, said Kim Goll, president and chief executive officer of First 5 Orange County, the county’s Children & Families Commission.

“It’s crippling for a provider,” she said. “They’re at 60 percent capacity at that point.”

“This is great news and exactly what we needed,” said Scott Ayres, owner of Spectrum Montessori, which operates four early childhood education centers for children ages 1 to 6 in Orange County.

Collectively, his schools are licensed to care for up to 768 children. But state public health guidelines, combined with existing space in classrooms designed for 24 children, limited his business to 340 spots, Ayres said.

But with the cap on 14 children per classroom lifted in Orange County, Ayres said Monday he can now fully open his classrooms.

Joy Juedes, development director for the Boys and Girls Club of Greater Redlands-Riverside, said the Redlands child care center is at capacity, serving about 75 kids daily. Before the pandemic, the Clay Street facility served more than 100 children each day, she said, adding that there are wait lists for certain grade levels.

Kids in the program receive assistance with schoolwork and can participate in any number of afterschool activities.

“We wish we could have more kids,” Juedes said. “But until the guidelines change for COVID, we have to go by whatever guidelines are in place for unlicensed child care.”

“The demand is there,” she added, “so we’re just trying to be here to support the families as much as we can with whatever they need.”

Besides the financial toll the pandemic has wrought on child care providers which has forced some to shut down their operations, many — particularly those who provided care out of their homes where an elderly member of the family also live — decided to suspend their services out of concern for the health of the children they served or their family members, said Cristina Alvarado, executive director at Child Care Alliance of Los Angeles.

But the type of child care in demand could also shift, she said.

“We may be looking at some different models” for child care in the future, Alvarado said. “How do we rebuild? Do we need to rely more on family, friends and neighbors? What does our system look like going forward?”

The answer to such questions, she said, may hinge on what the workforce will look like, including how many people will return to their job sites versus permanently working from home.

Michelle Miranda, owner of The Perfect Placement, an L.A. County-based agency that matches nannies and other workers with families seeking assistance around the home, said she’s had more inquiries in the past year for in-home nannies than ever. She noted, however, that her business has regularly grown year-over-year and could not with certainty attribute the increased demand for nannies to the pandemic.

But she did not rule out the possibility either and predicts some families with the financial means will continue to opt for a nanny over putting their children in group day care as things return to normal.

“A lot of people are still concerned about sending their child to day care, not that there’s anything wrong with it,” she said. “But I think for a period of time, until things really become safer out there,” there will be sustained increased interest in-home nannies, she said.

As for other child care providers who have been struggling to keep their businesses afloat, Nzewi, from the California Child Care Resource & Referral Network, said it will be critical for the state to use pandemic-related relief funds from the federal government to provide aid to this sector. The state is slated to receive about $4 billion from the federal American Rescue Plan, a little more than half of which is intended to stabilize the child care industry while the remaining funds will help make child care more affordable for families, she said.

“With this influx of funding, hopefully, more child care businesses that were forced to close will reopen, and those that are barely making it now will land on solid footing,” she said.

Whitney Leathers, board chair of the Long Beach Early Childhood Education Committee and executive director of the Long Beach Day Nursery, hopes more people are now aware of how necessary a well-run child care industry is to keeping the economy functioning.

She’s encouraged that local and state officials are starting to recognize the important role that child care providers and educators play in providing a safe space for children while their parents are working.

“One of the silver linings of the pandemic,” Leathers said, “was the realization that child care and educators in K-12 do so much more than just education, and that we really are a critical piece of the economy.”