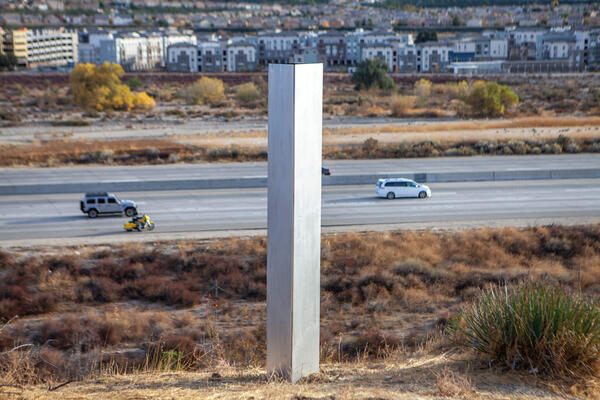 “It was just weird.”

That’s how Santa Clarita resident Austin Dave described a 7-foot-tall monolith that mysteriously showed up at Canyon Country Park over the weekend, then just as mysteriously, disappeared.

Was it brought by aliens?

That’s one theory floating around about this and other shiny statues that have popped up around the globe, including one reported a few hours away in Joshua Tree in recent days and another two in Northern California, first in Atascadero and then another in San Luis Obispo County.

Metallic, mysterious monoliths have been spotted at random places around the globe, as far as Romania and England, creating a buzz by curious conspirators captivated by their sudden appearance in remote areas.

“We have received credible reports that the illegally installed structure, referred to as the “monolith” has been removed by an unknown party. The BLM did not remove the structure which is considered private property…” More: https://t.co/ZXJDGzxDaD pic.twitter.com/xXHdijk496

The crew members found a metal monolith installed in the ground in a remote area of Red Rock, with no indication of who might have put it there.

The exact location – said to be a very remote area — wasn’t revealed due to safety reasons.

And whomever put it there did so without permission.

By Nov. 28, it was reported that the monolith had been removed by an “unknown party.”

The Santa Clarita monolith was also swiftly gone, but not before creating a buzz.

Dave said someone sent him a message about it on Saturday night with the location at Canyon Country Park.

The following day, he did the short hike and saw it just off the walking trail, calling it a “somewhat ominous” fixture.

Within half an hour, there were 50 or 60 people gathered around, taking photos. Some kids were hesitant to go near it, others crying as parents urged them to go next to it, he said.

“It was really an experience,” he said.

Dave thinks it was an imitation of others, more like a shiny laminated poster board. He said it had an LED light on it at night that would shine on it.

It has since been removed, replaced with a rock with a puzzling message, said Carrie Lujan, city of Santa Clarita spokesperson.

The rock reads: “There used to be a monolith here… now there is just a rock with boat Ben’s name on it.”

Some on social media point to The Most Famous Artist group, which posted a photo on its website of showing an “Authentic Alien Monolith” for sale for $45,000 with the words “Sold Out.”

Throughout its Instagram page, the group posted about the monoliths, but doesn’t come out right to claim credit.

A post shared by The Most Famous Artist (@themostfamousartist)

Hannah Schwalde, spokesperson for Joshua Tree National Park, said there’s been inquiries about a monolith in the desert area, but so far they haven’t had any official reports of it on national park land.

“I tried to look up any information I could, but don’t have information from park rangers,” she said, noting it could have been outside of the national park’s purview.

While Joshua Tree has a love, respect and great relationship with the artist community, and even though the monoliths are cool, it’s important to remember national parks are protected areas and it’s important to preserve the natural landscape.

Schwalde said she’s heard about the installations popping up around the world through news articles and social media reports.

“I see why people are captivated by it,” she said.