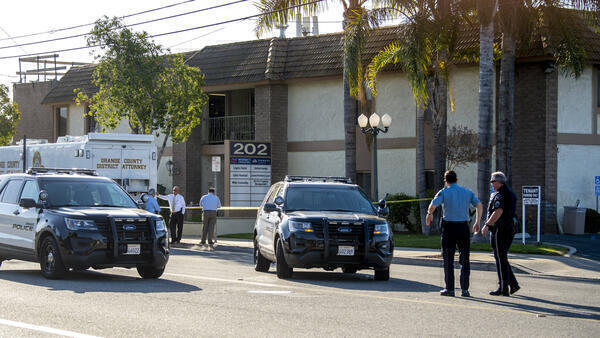 The 44-year-old Fullerton man suspected of shooting and killed three adults and a 9-year-old boy Wednesday night at an Orange business complex appeared to be motivated by previous personal and business relationships with the victims, police said at a Thursday morning, April 1, press conference.

The suspect apparently locked the gates of the complex, keeping police out until they could have bolt cutters brought to the scene.

The attack, with a semi-automatic gun, was not a random one, Orange Lt. Jennifer Amat told a crowd of reporters. It was unclear if the suspect had the weapon legally.

“This appears to be an isolated incident … and we believe everyone knew each other,” Amat said.

One woman and the suspect remained hospitalized in “critical but stable” condition, police said. The shooter was identified as Aminadab Gaxiola Gonzalez.

“It appears a little boy died in his mother’s arms as she was trying to save him,” said District Attorney Todd Spitzer, adding that relationship is not confirmed.

“Let me make this very clear: Mr. Gonzalez is eligible for the death penalty,” the district attorney said. If the suspect is convicted of four murders, Spitzer said,”It will be up to me ultimately to make the decision.”

At least one Orange officer fired at the suspect, authorities said, but it is unclear if police gunfire struck him. The suspect’s wounds might have been self-inficted.

Police said officers found a backpack they believe belonged to the suspect that contained pepper spray, handcuffs and ammunition. The suspect and victims were believed to be known to each other through Unified Homes, a mobile-home realtor with an office at the complex.

The Wednesday evening shooting sent a swarm of police, SWAT and fire personnel descending into the neighborhood as nearby residents and employees looked on.

Officers were called at around 5:30 p.m. because of shots fired at the business, at 202 W. Lincoln Ave., Orange police Lt. Jennifer Amat said. When officers arrived at the two-story office complex, near Glassell Street, they were met by gunfire and shot back, Amat said.

The shooting was reportedly inside one of the multiple business suites in the building but moved to a courtyard area.

Shortly after, police called it the deadliest mass shooting in Orange since a 1997 incident where a disgruntled former Caltrans employee armed with an assault rifle killed four workers at the agency’s yard in the city. Orange County ad a whole is no stranger to mass shootings.

The shooting came on the heels of a recent series of mass slayings during March that has left communities shaken including an attack on spas in Atlanta where eight people–six of Asian descent–were killed and most recently in Boulder where 10 were slain at a supermarket.

On Thursday morning, police vehicles were still outside the beige and brown building. Part of the Lincoln Avenue was still closed and traffic was being diverted as investigators combed over the scene.

A few residents were out, some trying to catch a glimpse of the remaining police activity.

Michelle Ayash, 64, has lived nearby for five years. She says she’s seen chases and stabbings in the area, but nothing like Wednesday’s slayings.

Ayash said she was just getting home from work when a friend called to say police were near her home. She echoed the morsels of details other neighbors have gathered from each other: a woman and child were among those killed. She, like several others, saw a video online of the apparent suspect being taken down by police.

“It’s a tragedy, and to be so close to home,” Ayash said, shaking her head as she stood near the police barricade on Lincoln. “It’s just scary. We live in scary times.”

This is a developing story. Please check back for updates.